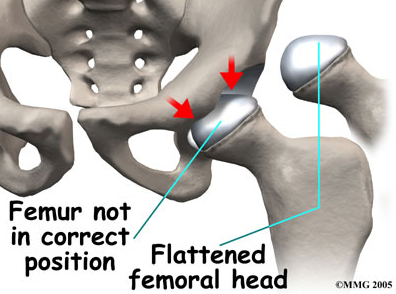 What is perthes disease?

Perthes disease is a disease of the hip in which the bone in the hip joint loses its blood supply. This may cause the bone (femur) to change shape so that it no longer fits into the hip joint (femoral head) properly. The disease run a 2-year course, and if left untreated, can cause permanent damage to the bone.

The first stages of perthes disease are silent. This means that the patient dose not limp or complain of pain. The bone in the hip joint (top of the thigh bone or femoral head) loses its blood supply and that part of bone subsequently dies. The bone weakens and a small fracture develops, with the result that the femur head begins to flatten. Circulation returns to the head of the femur within months, rejuvenating the bone but causing pain and a limp (and a visit to the doctor). If left untreated, the femoral head may flatten over the course of months. Leading to arthritis in later years.
What cause perthes disease?
Cause of disease is unknown. It is an accepted fact that it results from the head of thigh bone.
Signs and symptoms of perthes disease?
Patients with perthes disease present with a limp, pain, and a stiff hip. When the range of motion at the hip is tested, some movements will be reduced. The thigh often gets thin as well.
Some facts about perthes disease

How is perthes detected?

Because many disease processes have signs and symptoms similar to those of perthes disease, it is diagnosed by x-rays. The first x-ray may not be helpful. Because characteristic signs may not have appeared. Bone scans and magnetic resonance images (MRI’s) can be used to detect the amount of blood circulation in the femoral head. A two-group classification for perthes has been developed. Group A consists hips with less than half of the femoral head involved. This group generally needs little treatment and recovers well. Group B includes hips with more than half of the femoral head involved. Patients in this group need treatment to do well.
What treatment is available for perthes disease?
The aim is to prevent flattening of the femoral head. There are several methods of treatment: bracing, short periods of rest, soft- tissue releases, and operations on the bone.
Treatment is divided into five categories: (1) observation, (2) intermittent symptomatic treatment, (3) definitive early treatment (to prevent deformity), (4) surgery to make the femur head round again, and (5) late surgery for arthritis.
Observation
Observation consists of testing the hip stiffness and taking x-ray every few months.
Intermittent symptomatic treatment
This treatment consists of rest and exercise when the hip hurts, and may be used in conjunction with observation. It includes muscle-stretching exercise to maintain the joint’s range of motion, and periodic bed rest, with or without traction. X-rays at 3-4 month intervals are necessary during the early months after the first signs and symptoms appear.
Definitive early treatment
This type of treatment is used in cases of clinical onset at 6 years of age or older, a Group B hip, and loss of femoral head containment. It involves the use of containment methods (either surgical or non-surgical) early in the disease process

Late surgery for arthritis
Arthritis is usually managed by either an osteotomy to realign the joint or prosthetic replacement of the joint.
Prognosis
In general, the younger the child at the age of onset of perthes disease, the better the results of treatment. Many long-term studies have shown that most children with clinical onset at less than 6 years of age have an excellent prognosis. However, they must be evaluated through clinical and radiological (x-ray) examinations at intervals of 2 to 4 months. If loss of either motion or containment is noted, a short course (3-6 months) of nonsurgical treatment may be necessary.

The extent of femoral head involvement has much to do with prognosis. Children with less than half of the femoral head involved (Group A) show better treatment results. As loss of containment may still occur, these children must also be examined every 2-4 months.
Tips for parents