What is Developmental Dysplasia of the Hip (DDH)? 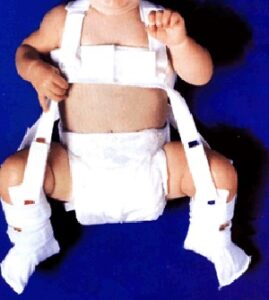 Developmental dysplasia of the hip is a congenital (present at birth) condition of the hip joint. It occurs once in every 1,000 live births. The hip joint is created as a ball and socket joint. In DDH, the hip socket may be shallow, letting the “ball” of the long leg bone, also known as the femoral head, slip in and out of the socket. The “ball” may move partially or completely out of the hip socket.Hip dysplasia is more common in females than males

What causes DDH?
1) Family members may be known to have DDH.
2) baby’s response to the mother’s hormones during pregnancy. A tight uterus that prevents fetal movement or a breech delivery may also cause hip dysplasia. The left hip is involved more frequently than the right due to intrauterine positioning.

1)    If the child is up to 6 months, then the use of a special brace called a Pavlik harness is reduced. About 92% of newborns with hip dysplasia are treated in a Pavlik harness to recover fully.

2) If the child is 6months – 1 year old, then under general anesthesia the surgeon will put the hip in proper position and later the child will be placed in spica cast which is similar to the Pavlik harness.

The success rate of the hip subluxation in infants depends on the child’s age and adequateness of the reduction. The younger the child better are the chances of early & complete recovery. Children with this persistent condition have a chance of getting pain and hip arthritis later in life. Hip osteotomy or hip replacement surgery may be needed later in life. The success of hip dysplasia treatment in India is 95-97%.